An exhibition of photography (and new media) at Arts@Trinity which

Fashion prescribed the ritual by which the fetish Commodity wished to be worshipped.
Walter Benjamin:
Paris – Capital of the Nineteenth Century

The themes and ideas that inform these candid photographs are ones that I have been thinking about ever since I first encountered the writings of John Berger and Walter Benjamin in the 1970s.

It is one of the peculiarities of my adopted home, Leeds that it doesn’t really have a ‘heart’ in the form of a city square. Instead it is Briggate, the oldest street of Leeds but also a modern, up-to-date retail thoroughfare, which serves as the ‘heart’ of Leeds. It was this notion that inspired my two year (2006-7) project documenting life — including shopping and window shopping — on, and around, Briggate. This culminated in an exhibition of over 150 large photographs in The Light.

…created from images from my mobile phone

For this exhibition I have created two “stained-glass windows” (below) by taking many (several hundred) photos on my mobile phone. These were added to a dozen or so pictures from my 2006 Briggate project and processed by means of the Instagram mobile phone app. and then printed as a bright backlit poster.

Each of the images was captured candidly and hence has a documentary value. But the moments captured are familiar, even typical, emblematic of our shopping “complex”, our pursuit of the new, and the ever-the-same. In order to make contemplation of these images easier I have presented 12 of these images in square frames along one side of the church.

My Instagrams as stained-glass windows in Holy Trinity church

Below: My pictures on easels and me, in front of the windows 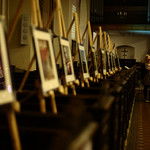 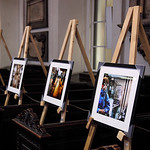 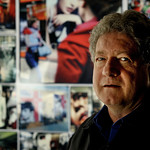 … and a bit more about me

I first became seriously involved in photography while working for the anti-Apartheid publishing house, Ravan Press in Johannesburg, South Africa. Then (1981-2) and later in Wigan and Manchester I helped start and run film and photography workshops and helped mount several photographic exhibitions in what I thought of as ‘documentary’ mode. Together with John Davies, I helped found the Counter Image photographic workshop in Manchester.

As well as editing a book of essays by John Berger and working with him on his major statement on photography, Another Way of Telling, I have written two ‘comic books’ on philosophy, Hegel for Beginners and The Enlightenment for Beginners. I spent a quarter of a century teaching undergraduates and have run a number of on-line courses and workshops on various aspects of photography and on creativity generally.

In addition to the exhibition on Briggate, I conducted a second long-term photographic project exploring night life on the streets of inner-city Leeds with Stephen Griffin. At present I am working on a series of projects involving portraiture, foliage and forests, and dance photography.

The Instagram images that make up my “stained-glass windows” have been compiled into a photobook (preview below). To order your copy visit http://www.blurb.com where I am known as Briggate.com

http://Click here to view the book of my Instagrams on Blurb.co.uk

Take a closer view of some of the Instagrams by clicking on any of the images below.

If they appear unclear at first, they will resolve and become clearer.